Personally, I experience the greatest degree of pleasure in having contact with works of art. They furnish me with happy feelings of intensity such as I cannot derive from other realms. - Einstein - 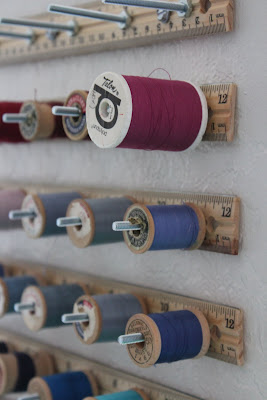 We’ve recently been absent. After finishing the kitchen Steven took a furlough from my long list of projects to finish his MBA. He’s done! Meaning we’re back in action. The past two weekends have been very productive. Here is a sneak peak of what is to come:

Adapted part of the kitchen into a sewing nook with ruler thread holders.

Transformed a metal case into a wall mounted jewelry box.

Put another metal piece up for the office wall. The wall is close to being complete.

Steven mentioned touching up the baseboards. (I’ll take what I can get.)

Reinvigorated the atrium.
Let’s take a look at that first project. There is an empty space at the end of our kitchen. It has two windows that look out into a portion of the yard. The space was so lonely and needed some love (aka furniture). We took apart the orange sewing table and reassembled it in the nook. Then we needed to start removing an old project from about a year ago.
Posted by Elizabeth

Know what you are looking for?